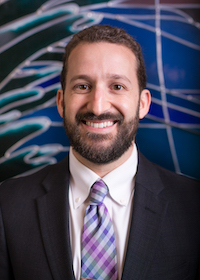 Born and raised in Santa Monica, CA, Rabbi Feivel Rubinstein owes much of his love of Jewish life to Camp Ramah in Ojai, CA and USY (United Synagogue Youth) where he spent much of his childhood. When he went off to the University of Colorado in Boulder he found a home in the local Jewish community. He quickly became involved in AEPi, Hillel, the JCC, and several local synagogues. In Colorado he found his passion for Jewish education, and spent the next decade working as a teacher, youth director, torah reader, service leader, and camp counselor.

After graduating with a degree in Music, Rabbi Feivel turned his attention towards the Rabbinate and enrolled at the Ziegler School of Rabbinic Studies in Los Angeles, where he met his now wife Rabbi Sydni Rubinstein. From 2014 - 2019 he worked as an educator in the Los Angeles Jewish community while serving as the Director of Ritual and Prayer at Camp Ramah in Ojai.

In August of 2019 Rabbi Feivel moved to Shreveport, LA where his wife now serves as the Rabbi for Agudath Achim. Described as “a camp counselor by constitution and trade”, Rabbi Feivel currently owns and operates FreelanceJudaism, works for the North Louisiana Jewish Federation as their programming director, as well as teaches in the local religious school. It is through these organizations that Rabbi Feivel pursues the important work of inspiring youth and young adults to use God and Judaism to become the best versions of themselves.